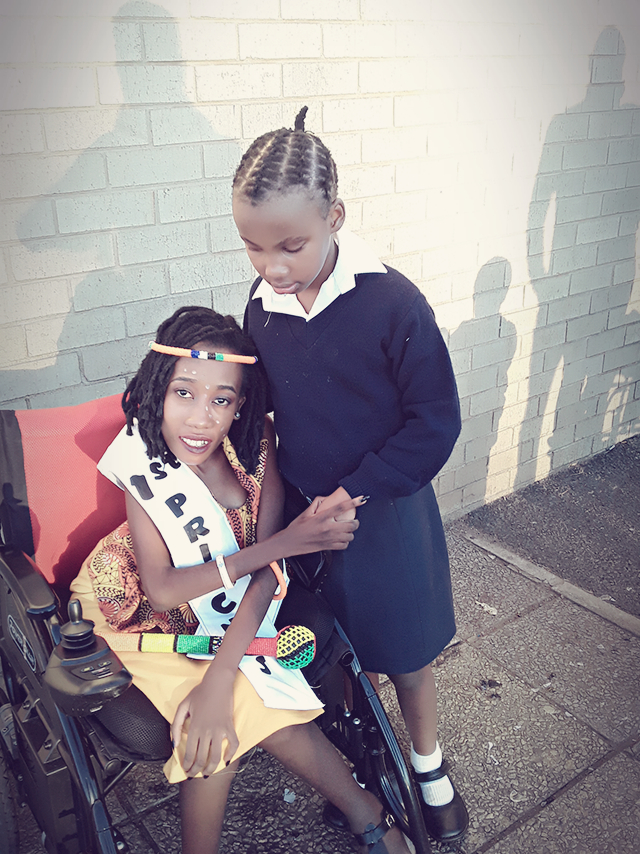 Nokuzola was born under extremely harsh circumstances in the Kraaipan village near Mafikeng in North West Province of South Africa. She grew up having to contend with an abnormal spinal condition called scoliosis whereby the spine has a curvature causing back problems. Scoliosis is not as rare as one may think and affects 2 – 3% of the population, however, most patients have a mild form of the condition. During Nokuzola’s formative years it became apparent that she had severe scoliosis, which meant she could no longer walk and needed a wheelchair for mobility. An extremely tough reality, for a playful, energetic young girl who often reminisces about her early youth; “I was prohibited from being a part of things close to my heart like swimming, skipping, playing scotch and gashe. But I had to accept.”

When only 11 years of age, her mother passed away tragically. Leaving her in the unerring, resilient arms of her grandmother who “did everything in order for me to always be happy, she was more than just a mother figure in my life. She taught me many things about life, how to live fearlessly as a rare creature and to always be brave”. Her grandmother watched on as she grew-up “brainwashed” by her disability as it worsened. She started losing weight, her spine curved increasingly, tumours developed in her lungs and back and standing upright became impossible. A wheelchair became a permanent fixture.

On top of the physical problems she faced, it became just as much of a battle mentally. She explains how living with a disability is always a struggle as “discrimination is there”. She recalls, it was not worth trying to do things the “normal kids do”. Often thinking she was cursed, she would question God and ask “why her?”. Slowly, but surely, with the help of her Grandmother she started to realise she was blessed, someone out of the ordinary and he had bigger plans for her.

As Nokuzola began to accept her disability she started to flourish. She made her way through school obtaining a matric and then moving on to become an IT graduate after obtaining her IT Diploma in System Development at DVG Media Training. She is also a model. “I am a shy individual but I always knew I loved being in front of the camera. My modelling journey came into the picture unexpectedly, like boom!”

Her modelling began shortly after she started a page where she aims to inspire person’s living with disabilities as well as help them find employment. She sacrifices her own expense and time to share job posts and information with her community as she believes “it is very difficult for most disabled people to access valid information”. While still on the hunt for permanent employment as she has found “most companies cannot accommodate person’s in a wheelchair”, she will notice opportunities that fit her community members and in those cases she will take the “opportunity to substitute [her] CV for theirs”.

She first entered Ms Rise and Fly 2019, a beauty pageant that she won. She very recently attended auditions for Miss Phenomenal Queen South Africa a pageant which aims to gives the daughters of South Africa a platform to empower themselves and address the issues they believe in. Despite many people complimenting her outward appearance, she believes the beauty of a woman is more than that. She explains that these beauty pageants were an attractive platform “for it defines real beauty from within.” She hopes these platforms and others will allow her to inspire, lead and campaign for social change for person’s with a disability.

Nokuzola’s story is one of never giving up, no matter what obstacles are put in your way. She altered her mindset to see obstacles as opportunities. She has done so much in her young life, but this is only the beginning for a shining light in the community who will stop at nothing to empower person’s with a disability and we wish her the best of luck. We will be following your story closely as it continues to unfold. 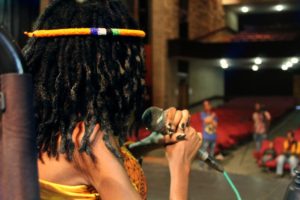 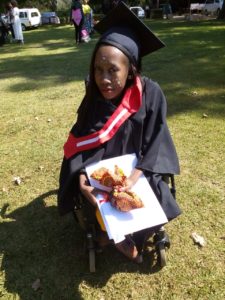